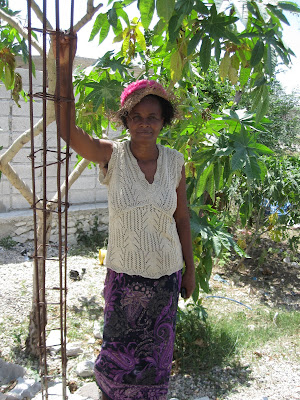 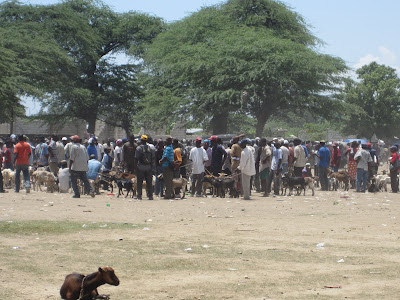 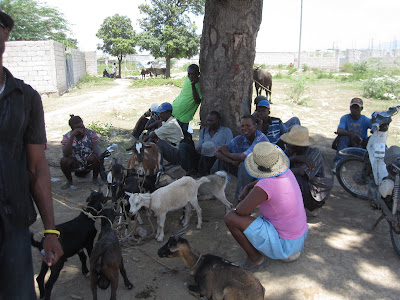 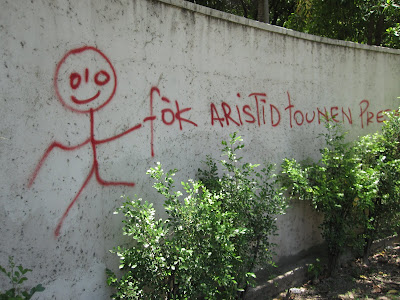 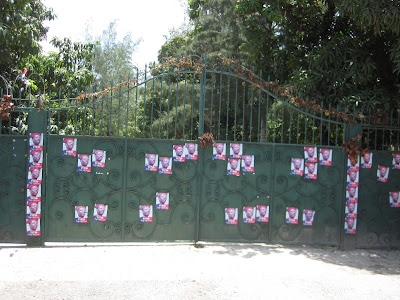 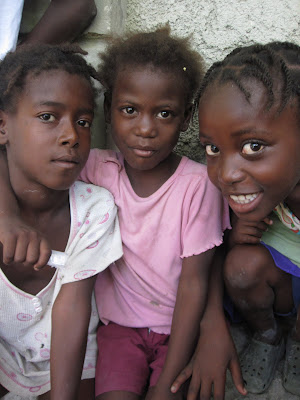 the girl on the right is jennifer. 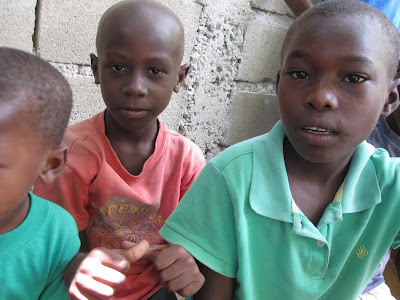 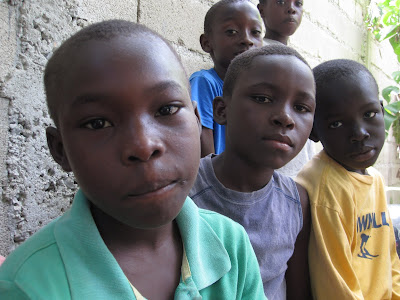 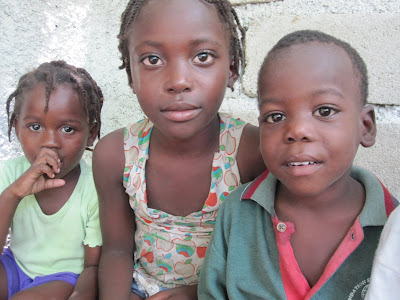 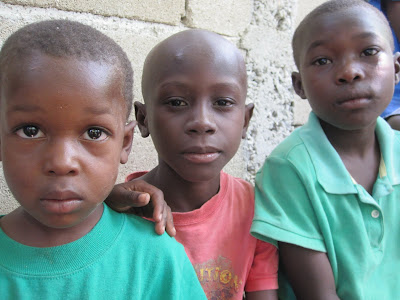 Today while riding the motorbike through yet another rush hour (which seems to last all day) i noticed the bike in front of me had the word "dayang" on the back of the seat. I thought to myself, "dayang!' and then I heard loud snorting emanating from the back of a white box truck, back open, stuffed full of humans and apparently pigs.
It was market day. I had my boots on. Why it has taken me this long to realize that I should wear my cowboy boots while driving the motorbike instead of sandals is beyond me. But wearing them, I swear, increased my expertise on the bike ten fold. I am not over confidant, though I did feel more fierce. Yesterday I got a leg burn on the exhaust pipe. Not today. Today I was driving Julian and I to a couple orphanages. Julian and I are becoming good friends. He directs me from the back of the bike and encourages me. The first day I drove us, while I was hesitating at an intersection, wondering how to enter into it, kind of like skipping rope, he leaned in and said in my ear "engage with the traffic" He is like yoda or something.

Today. Julian on the back, "that way" me"that way?" he"that way" and he pointed at a dense crowd of people and goats walking in the market place. "what the fuck?" I shouted back at him. He said "do it, honk the horn"

Ok. It's one kind of fear to enter into a danger dance with vehicular traffic and an altogether different kind of fear to enter into human traffic. I prefer to risk my own life than to risk running over another person or even a goat. As we rode through, we hit this enormous rubble patch and I had no alternative but through it. crazy. I saw a SUV driving through, we were behind them and the dude driving started running over an old ladies basket of grains. Harsh.

We drove into a field full of people and animals and sought shade under a tree with a bunch of other people and goats. Julian bought us some bags of water. I am still not used to sucking water out of a plastic bag. I squirted it into my water bottle and wadded up the plastic. I cant bring myself to throw it on the ground as is customary here. I just cant do it. I'm a fucking environmentalist. He laughed at me and said, "give it to me" and I almost did until i noticed the glint in his eye. He was going to pretend to pocket it and then throw it down. I grabbed it and put it in our bag. People were watching us curiously. the goats even seemed interested.

I looked over at the field of milling people and goats and cows and I imagined I heard sadness and lament in the crying voices of the animals. Today they would be bought and slaughtered. I get itl, the beauty and connection between people and their relationship to food. It's so intrinsic here, unlike shopping in whole foods and buying a packaged slab of meat. I still feel bad for the animals. I cant help it. There is a rooster on the compound where I am staying. Every morning without fail at 6 am, it comes right up to my tent and cock a doodles his doo dad right in my earlobe brain cell. I gather from what I've heard that there used to be 7 roosters on the property. Not very popular. Kind of like the greasy wheel and not as necessary.

Vegetarians are unherd of here. People look at me like I am insane when I tell them I dont eat meat. I am insane but not for that reason.

Today I realized that people have been commenting on my blog. Friends and relatives. It was like christmas when I found out. Thanks for reading and commenting! It makes me feel so happy and good.

I cleared it with the Grub logistics coordinator. Any of my close friends who have the inclination and means to come down here are welcome. The only requirement is that you fill out their volunteer questionnaire. I highly recommend coming. It's an experience you'll never forget your entire life. There are plenty of projects to plug into here and we will put you right to work and house and feed you.

I have an empty tent waiting! I will personally pick you up at the airport.

I was sent into a giddy revelry imagining various favorite human friends of mine here with this international community of folks staying at Grassroots United. I would love any one of you to come. If you are thinking about it, please email me.

Went to two more locations today but was unclear whether they were actually orphanages or not. One was more like a day care. None of the kids were orphans, just children of really poor people who cant feed their kids. It was actually a sweet location, a nice house with trees and a back garden. Some kids were on the back porch watching a haitian singer on the tv, it was showing scenes of the streets and the music was beautiful. I asked the guy where his kids were and he said they were "out playing" in the streets. He wants to start a school. As it is the kids just come and eat when he has something to give. I have always marveled at the generosity of the poorest and the lack there of among the "haves" What exactly is up with that? He had one of the kids go out and gather up the others and they all sat politely and curiously on a bench under the shade of a welcoming tree as I interviewed the young man in charge with the help of Julian. I was disturbed when I saw the kids drinking water out of the hose. I asked and he said they haven;t gotten sick from it. I want to bring him a water filter and books and food and so much more. This cat is golden. I asked him "why are you doing this?" and he said "These kids will be me in the future" I got really choked up at that. I tried unsuccessfully to hide it. Julian asked me if I was alright and I said yes. I told the guy "What you are doing is really beautiful" and I thanked him. They dont need a dome.

I took some photos of the kids which really livened them up. They said "magic" and "jennifer" one of the girls names is Jennifer. I thought of my dear sister up in Alaska. Hi Jen! These kids are the future. Can we please take care of them.

We said goodbye and got on the bike and drove away. That is when we hit the marketplace and the me driving into the human sea. We were headed to the next location and it was arduous as hell getting there. But we made it alive. Thats good news.

The next place was hard to decipher. But I liked the ladies hat alot.

We passed Aristides house today and I had to get off the bike and take a photo.

We headed back to the base and found our friend Mike from MMRC chilling on the front porch. We had lunch. It was three oclock.

Naftalie came by and told me more about her friend who has 36 kids living in a tent nearby. I will go visit them as soon as I can. I went out back and did laundry. I asked Naftalie "do you know what a laundrymat is" she said "Yes." I love the way this kid says yes. She draws out the s in an adorable way. When I asked if they have them in Haiti she laughed at me. A big laugh.

I threw the bucket down into the cistern and pulled up a bucket of water and sat in the shade and scrubbed my dirty clothes. Really dirty. It's enjoyable. It takes awhile. I hung the clothes up on the line and then the storm came. A huge thunderstorm. The lightening danced across the sky in a brilliant stripe shaped like the roots of trees. Loud thunderclaps shock the ears and guts. I thought of all the kids I have seen so far and their pathetic shelters. I thought of them trying to stay dry under there unsuccessfully. I cringed and growled to myself over my lack of domes and my inability to provide the meager help I had hoped to give. I could have already made a difference a significant one in their lives. I have to wait. Waiting has never been my strong suit. Never. It has to become it or else I will just go insane. I mean bad insane not the good kind.

I sat with the folks on the back porch, yakking about the state of Haiti and various solutions they are implementing or thinking of implementing. I watched the rain in the trees and on the vinyl roof of the 60 ft dome warehouse. I watched the gutter coming off the roof spew an impressive stream of water. I got the 50 ft stare. I wasnt listening to the people around me. I got up and took off my vest and got under the gutter and had a shower in my bikini. The pressure was fantastic.

A word about the customs man. He came today and said it;s almost out. He made it sound like he was going to go get the stuff today and then disappeared. Its Friday. I would be a million goude that it wont be here until at least monday and if it is here on monday, I will be the luckiest person in history.

Thanks to all the people at Grassroots United for supporting this project by welcoming me into their compound and family. I love this place.
Posted by Lmnopie at 6:57 PM