I'm taking in some IV saline solution right now because I got really sick from dehydration this morning. It was weird because I started out the day feeling fine, we even had a mini dance party in one of the domes at around 7:15am to start the day right. Afterwards, I took a quick bucket shower and then suddenly my ears went all muffled and i felt really ill. 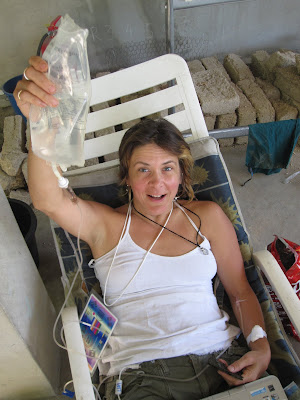 I called up my friend Mike from MMRC and they were here in 10 minutes. Heather, my home girl from Brooklyn, got me hooked up to an IV really quickly and efficiently. I love her. So I've been sitting here getting dripped.

So much has happened since I wrote in here, the other day.

Julian, my new translator and guide, is fucking awesome. He grew up in Haiti until he was 15 and then moved to NYC to live with his Mom. He and I have been cruising around on the motorcycle, me driving (!) to do orphanage assessments. We visited 4 in one day on saturday. Extremely productive. I found 2 sites for domes, one amazing shelter for girl victims of abuse called Kay Fanm, and one shady operation that we are going to try to shut down.

I'll start with the suspicious place. We were in this neighborhood and some people were telling us there is an orphanage nearby to there so we went, unannounced to check it out. The young man and woman who answered the gate were extremely unwelcoming, at first only peering out a small opening in the gate, a peephole that closed and opened..
We finally got them to open the gate and they stepped out. I got the intuitive feeling immediately that they were uncomfortable, kind of like when you catch someone with their hand in the cookie jar, so to speak. We explained that we were humanitarian workers and we were there to see if there way anything we could help them with. We asked if we could come in and look around and they said no. I asked if they needed anything and the kid said he didnt know. I kind of laughed and said, surely you know if you have food, water and shelter? He said we had to ask his boss. We called him up and Julian spoke with him and he granted us entry. Julian told me later that the dude said to him something to the affect of, "if you get us some stuff, we'll make it worth your while"
When we entered, the kids looked really scared. There was a yard with one tent and a pretty large two story house. The first floor of the house looked like a storage shed with boxes piled up pretty high. When we asked what was in the boxes, he said it was stuff that had been donated to them by the french people. Apparently, it wasn't an orphanage but rather an adoption agency for French people. He claimed that the boxes of stuff was being given out on the streets to people who need it, but I dont believe that. I think they are selling it for a profit. The kids are certainly not benefiting from it, they looked ill cared for, dirty, hungry and not clothed well. I asked the guy, through Julian, my translator, "is this a non profit or for profit venture" and he said non profit, of course.

Being in Haiti is all about networking. On the grassroots level, that is what we do. We share resources and information freely to better help those in need. For example, right now, by buddie from MMRC, the ones who just gave me an IV, just went and got a truck load of palettes for our new warehouse full of medical supplies and then they took Julian and went to visit one of the orphanages we visited on Saturday to give the kids some medical attention. The Woman who runs that orphanage said some of her kids were sick with fever and chills. So we do what we can with the human resources available.

So, Tara, who works for Heartwood Alliance, can maybe do something to stop whatever weird abuse or possible for profit adoption business is going on there. I gave her the address and name of the dude who is living in the second floor of the building in probably luxury while these kids live below him in a storage room. 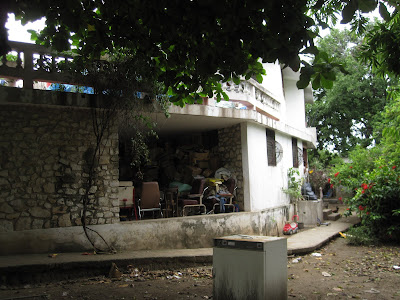 Now for the Positive. Enter Yolette Jeanty from Kay Fanm. 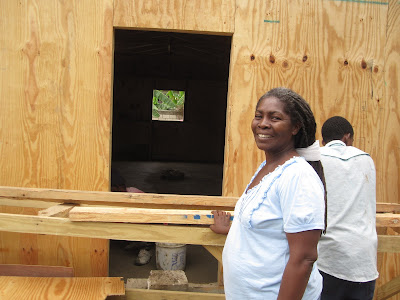 She welcomed us into her compound with open arms. When we entered through her gate we found a beautiful yard with music playing, girls with wheelbarrows moving rubble, gardening, a full on construction site, trees, alot of activity, girls sewing and washing clothes and cleaning the premises. The vibe was happy and productive. 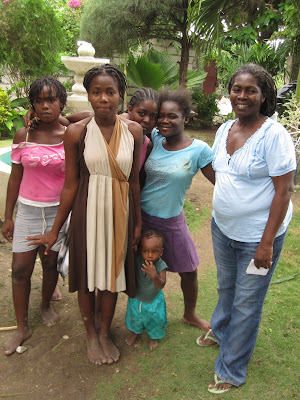 Yolette showed Julian and I around and spoke at great length about her hopes and plans for the shelters she is building for the girls. They had been renting a shelter in PaP for the girls but it fell down in the quake. So she took the girls, 15 of them and brought them to her home, pitched a giant tent for them and then she got a grant from Unifem to build with. She doesnt need shelters, but she could use other stuff like furniture, beds, water tank and filter system. She has two treadle sewing machines for the kids to use to learn how to sew garments as a mini cottage industry. 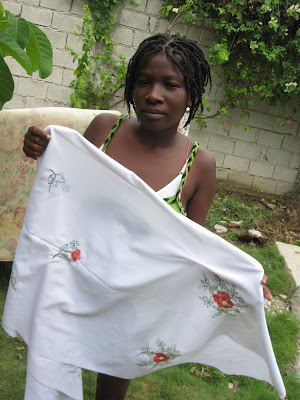 Additionally, I told Yolette about another org staying at Grassroots United called Kleiworks. They have a mission to empower women to learn construction skills in permaculture building. Yolette was very excited by this concept and so I put her in touch with Kevin right away. I can also help her help the girls learn to support themselves by donating the fabric and notions I brought with me if I ever get my freaking shit out of customs. I would like to buy them an electric sewing machine. 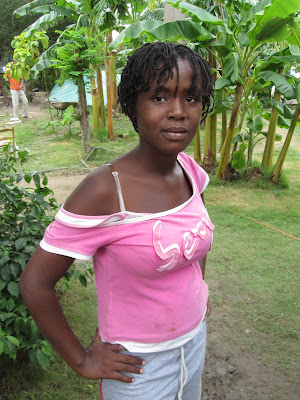 Also, they could use a composting toilet as it is there is alot of people using one toilet there. She was interested and open to the concept. I am in touch with Amy from Soil so will see if they can go throw one up over there in her lovely compound full of budding flowers. 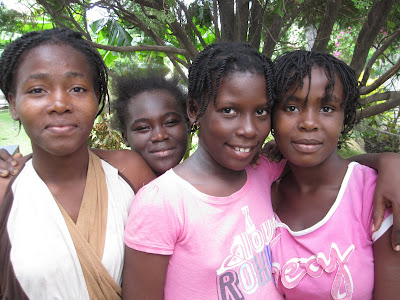 I was extremely touched and moved by my visit with Yolette at Kay Fanm.
People like her are rebuilding Haiti, one person at a time. The only real way to get things done is to start small and grow.

We got on the bike and drove away. Driving this motorcycle is at the same time exhilarating and terrifying. A perfect Challenge for me. I'm glad Julian trusts me, but then again, he is used to this chaos 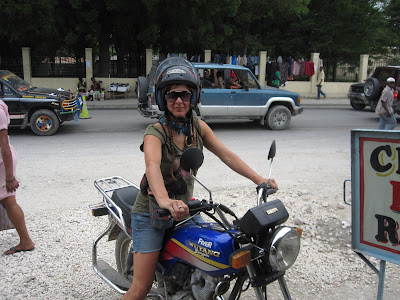 Women can do whatever we set our minds to. We are just as strong as men, proportionately.

I noticed many many girls staring at me on the bike. Julian said its because women dont normally drive motorbikes.. HA! they were adorable and I hammed it up a little bit to cover up the fact that I am really not such an expert. Especially when it comes to U turns. I did wipe out, I am not going to lie, but only once! In a mud puddle! we did not get hurt. I was embarrassed though, but that doesnt hurt that much.

On a side note, Kara Blossom left today to head back to NYC. Her time here was too short!! Everyone loves her and she has promised to come back in 20 days..... Thanks Blossom! You are truly Awesome.

The next place we visited was called Foyer Des Orphalins D'Haiti and they have 35 kids living in very squallid conditions. 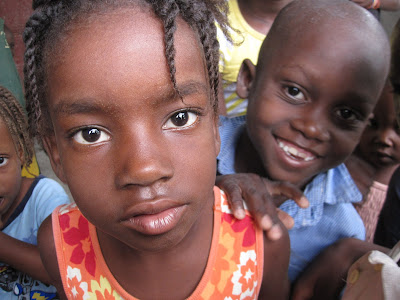 There is a bombed out looking cinder block building and a large open air type of tent. Kids were abundant and they looked well cared for but hungry. Desamours Eyanette is a lawyer who lost her job in the quake and owns the property where the kids are staying. This is our next dome site. 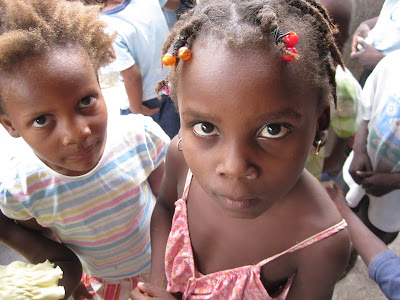 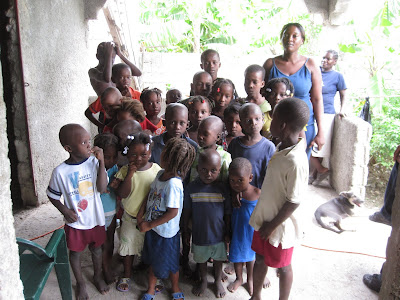 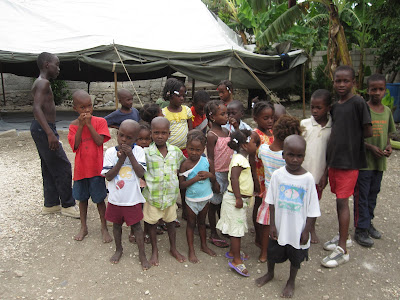 They desperately need shelter, food and the kids are sick with fever and chills. I just sent a EMT team there to give them some medical attention. I will bring them a dome and build it there as soon as I get my freaking shipment. (today??? who knows, I am waiting, pretending to be patient, beginning to wonder if I will make it back to NYC before August is over. I do want to have my birthday party in Haiti, though. Ef Burningman. my bday is the 31st ) 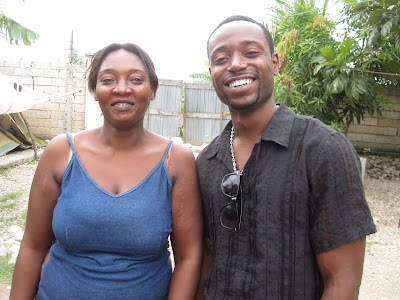 
We visited one more place, to get to we drove through Cite de Solel.
I will have to blog about that one later, I am hydrated and although I feel a wee nauseous, we are going out to see another orphanage or two today.

Keep your fingers crossed that my shipment comes in today!
Posted by Lmnopie at 9:03 AM