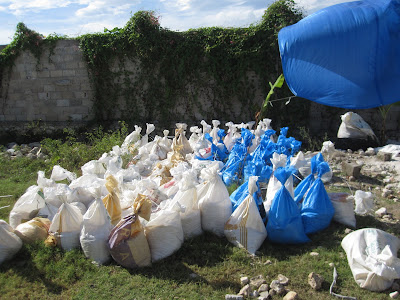 I've never been a terribly patient person. In Haiti, impatience is not a productive use of time. It would probably follow that the same would apply anywhere in the world, but I am not sure of that. I am picturing someone with big hair in the US getting all red in the face because her latte wasn't served up quickly enough. Maybe her red complexion and shrill voice would make the worker deliver her latte quicker, perhaps it would have the opposite effect. It would just depend on the psychology of the cafe worker, if they were more inclined to exert their power to make the impatient one suffer more or if they were more inclined to just get the impatient one to go away thus serving them more quickly.

In Haiti, impatience only hurts the impatient. So what's the point? Just put your attention elsewhere and get done what can be done and hope that by the time you get all the other stuff done, the thing you were waiting for would have happened by then.

The domes are still in Customs. It's what is. There is nothing that can be done that hasn't already been done to make it happen quicker. Getting red in the face metaphorically has no results other than bursting blood vessels. I have been told that the earliest they will arrive is today and the latest is by monday. All of the paperwork is in the hands it's supposed to be in, I just need one signature from one dude and then the other dude can pick the stuff up from customs and bring it on over to the base.

In the meantime, I am spending my time going on excursions to orphanages to asses whether or not they are in need of shelter and if there is room for it. Locating orphanages is no mean feat. It can take hours just to find the orphanage, especially if one is traveling by car or tap tap. Tap tap is a sort of public transportation device that is basically a pick up truck painted all fancy on the outside with an extra plastic truck bed insert attached to it upside down on the top to create a roof. People jam inside like sardines. You catch a ride with one, if you are lucky enough to find one with any room at all, by standing on the side of the road and pointing at the ground in front of you.
People bounce along the crappy streets on wooden benches in the back of the truck that really hurt your ass. 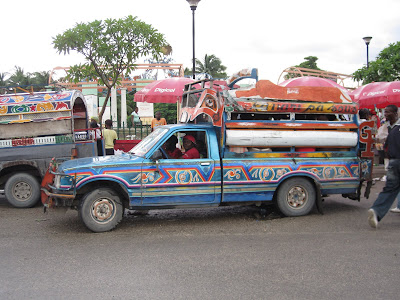 Yesterday, Emma, who is the Grassroots Unitied's Orphanage Project Manager, Naftalie, who is the young girl who lives behind GRUB and serves beer and drinks through the magical "hole in the wall" and is a translator at 15 years old, all three of us set out on foot from GRUB to go visit, unannounced, an orphanage we thought was close by. It was raining and I luckily found an umbrella to use because wearing a rain coat is sweltering.
Naftalie happily wore my raincoat which has bikes printed all over it in bright orange. (Thanks Ray for letting me use your screen)

We started walking and soon had a posse of motorcycle guys haggling over who would give us a ride and how much it would cost. It was rather unpleasant and I didnt like the tone of voice they were using with Naftalie. So I encouraged us all to walk away. Just walk away, so we did. We ended up getting into a car, a sort of gypsy cab and the dude started driving. Emma and I looked at each other and she said, "this is the bit when we go missing" and we both laughed. The driver drove us really really far. We got lost, we were on crazy dirt roads that you might think require a 4 wheel drive vehicle to surmount but somehow this dudes crappy 4 door sedan made it. I started to feel dubious about our visit when I noticed the neighborhood improving, the amount of green stenciled letters on buildings was increasing and the size of the houses was actually rather huge. We finally found the orfalena and rang the bell or knocked as it were on the gate.

We proceeded to have a very awkward exchange with a somewhat puzzled looking young man. He showed us around the place, which was immaculate and HUGE and nicer than any house I've ever lived in. The kids seemed really happy and well adjusted. There were bedrooms and verandas and a comfy couch and a television set. There was a brand new soccer ball. They clearly did not need anything. So we asked the guy if they were open to having more kids sent there. He said yes. We thanked him, took a few photos and split. 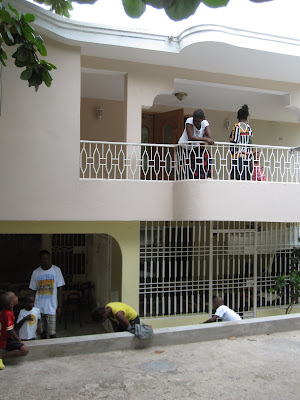 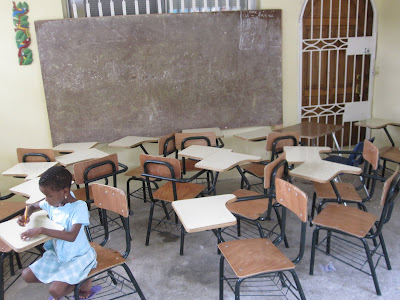 The car guy had left when he realized we didnt have enough money to pay him for the return trip. So we started walking. It was a very long walk. We passed a goat on the street who was giving birth and a bunch of other goats who were just milling about.
We passed many street vendors and heard many voices calling to us the standard "Hey You" and "Blanc" We got to the main road and tried to get on a tap tap but every single one that passed us was packed to the gills. So we walked some more. Bought a few sodas and walked some more. It was not raining anymore. It was fine. There were alot of paintings on display along this one particular part. One of the paintings was of a woman with an enormous behind. It seems to be a repeating motif. 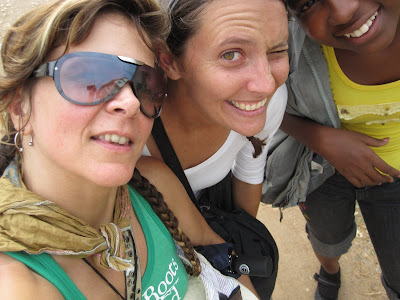 Emma and part of Naftalie
We finally got on a tap tap, Naftalie and Emma got in the front of the pick up with the driver and I jumped in the crowded back. 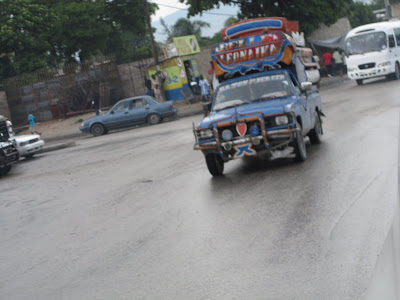 NYC subways have nothing on this public transportation. 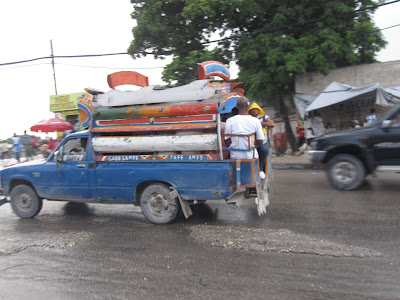 One woman kept saying something to me in creole that sounded like "cabella, cabella cabella" I think it meant "just stop" but all i did was repeat her and cause everyone in the tap tap to laugh and ogle me. It was awesome. 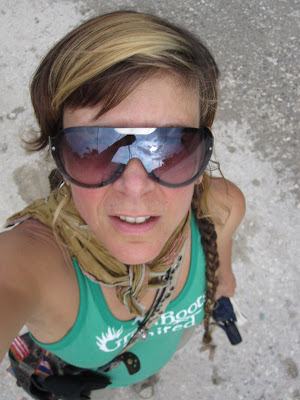 I dont really see other white people riding tap taps. I did see some pass by riding in the passenger seats of air conditioned SUV's.

Today we were quarantined to the base because of some sort of massive protest in port au prince and a country wide worker's strike. We were told it was too dangerous to go out. However, a couple of us did leave to go out and get some food. More orphanage visits were ruled out for the day. Brenda came back and we collaborated on a Memorandum of Understanding to use as a sort of contract with the orphanages stating the terms of conditions being solely for use as shelters for orphans and expressly not for profit or gain. There are other stipulations included covering all issues that may arise including whether a landowner might try to possess the domes and kick the people out of them, etc etc.

A solid partnership is forming between Grassroots United and Domes for Haiti. I am very excited by the potential for future projects between our two organizations.
Posted by Lmnopie at 11:40 AM