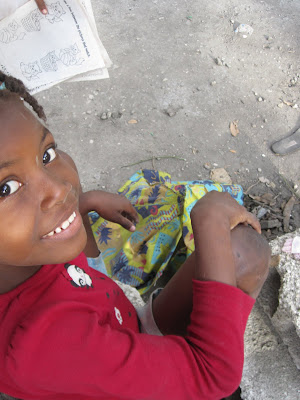 this little girl was out back, playing by herself, making a small shelter out of sticks and an old umbrella cover. She was the tipping factor to make me chose her orphanage as a dome site. 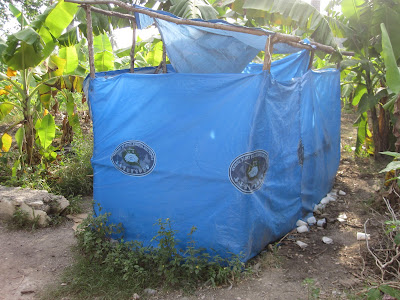 these are the current latrines at the site we visited yesterday.
too bad the photo isnt scratch and sniff 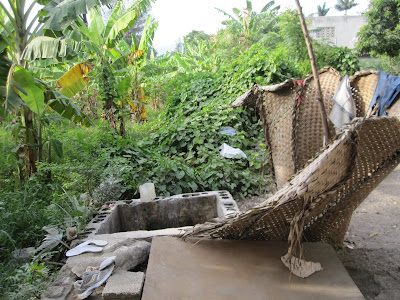 I believe this is their cistern 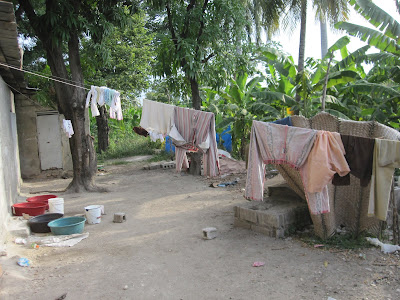 The back area of the orphanage we went to visit yesterday 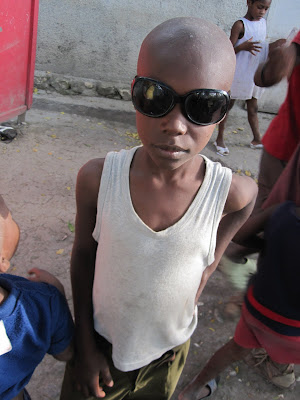 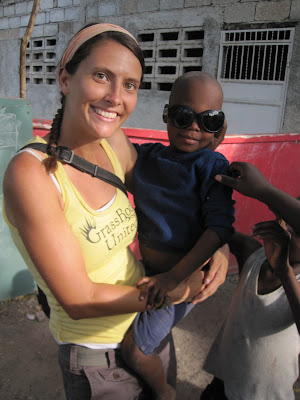 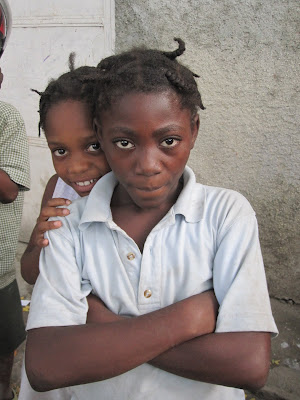 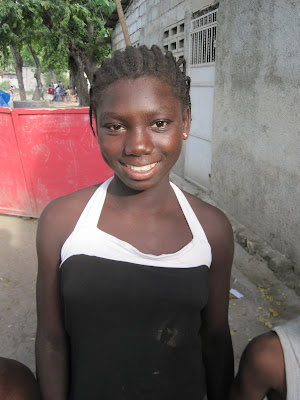 being with the kids i meet at the orphanages is when i most keenly feel the sting of my lack of creole. we cannot communicate verbally for the most part, other than them saying "what is your name?" over and over and me saying "se bon" or "mwen pa pale creole" its a wee bit maddening. but there are plenty of non verbal means of communication available to us, so we manage to connect despite the language barrier. 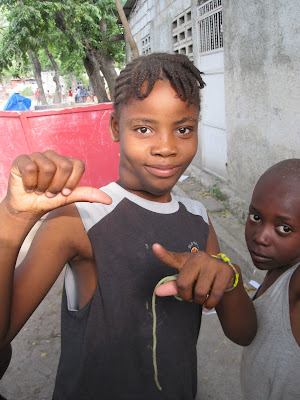 the kids took turns wearing my bike helmet
yea, i know what you are thinking and i dont care 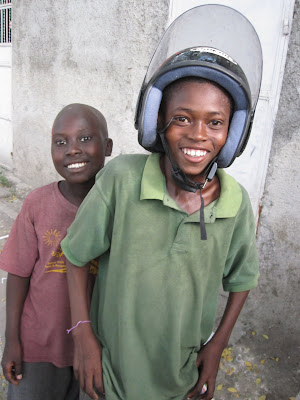 Domes are still stuck in the other country known as "Customs'
It's incredibly frustrating to have worked for 6 months on a project with alot of forward momentum only to be stalled on the ground in country. However, I am redefining the meaning of forward momentum by utilizing my time in ways that are both edifying and productive. Just being here is an education. Learning to drive a motorcycle in Haitian traffic is like boot camp for the insane. I have been visiting orphanages and doing assessment interviews. I have located 6 solid sites for the domes and had my eyes opened to a myriad of deceit. With the opening of my eyes comes the understanding of what is behind these deceits. It's a system flooded with orphans at the same time a devastatingly poor in monetary terms country. So with the observations comes a grain of compassion, however infinitesimal, however horrible the abuse, it's a result at least in a small part due to the environment.
The environment does not excuse the behavior in any way shape or form, but it does frame it accordingly.
The place I mentioned in an earlier post will be having a visit tomorrow from a team who will bust them and get the kids out of whatever shitty situation their parentless state has put them in. Grown up people preying on children as an economic means is absolutely unacceptable.

I'm sitting on the back porch of Grub, five mosquito coils burning quietly silently while the crickets sing along with my friend Richmond's guitar playing. He shaved his enormous beard and cut his shaggy hair off about an hour ago. He looks like a entirely new person with a chin.. We decided his name is now Jack. I dont know why.

For some reason, at 11pm at night, a semi truck is suddenly backing into the compound. Voices in the dark are shouting in creole directions to the driver. Another shipment of medical goods perhaps for the new warehouse that is a 60 ft geodesic dome.
In a word, it's awesome. I love Buckminster Fuller. The night before we put the skin on the dome, I laid out on the concrete slab and looked up through the patterns of interlocking triangles and marveled at the intricate geometry of the thing. Pure genius. Pentagon in the center surrounded by hexagons forming ever widening pentagons made of triangles. The full moon crawled its way across it's map as I listened on my ipod to the voices of friends singing in another time and another place. I got up and danced and danced and danced. Kind of like the other night when I had so much energy I did laps around and around and around in the cool of the night until I was sweating through my clothes. Only then could I go to sleep.

This is me, waiting for my domes. In a community, a closed compound with some of the most amazing people I've met in my life. We venture out fairly freely during the day, but there is a curfew of 10 pm. It's not so dangerous out there though. Just people.

Today I went out to amerijet and customs and got very little accomplished and then came back to the compound and stuffed aggregate sand into plastic liter bottles to be used for building shelters with. I then made some hummus. Tahini is delicious. Is this interesting reading? I dont really mind if you think it's not pertinent to my project.

Later I took Emma on the back of the motor bike and we headed out to a "close by" orphanage that she has been working with for a couple months. Turned out to be rush hour. Oops. Some things are the same no matter where the fuck you are. The thing that is not the same is that you have never seen rush hour traffic like you see in Ayiti. It's insane. My friend almost got hit with a dresser one day. A dresser in traffic. You couldn't make up the shit you see on the streets. In NYC, riding a bicycle in traffic is one kind of crazy. Here, riding a motorbike in traffic is taking it up 500 knotches and adding an 360 degree radius of potential projectiles. I am learning to weave in and out of all manner of pedestrians rolling tires, wheelbarrows, giant carts, motorbikes with three people and huge chunks of ice on the back, a kind of air conditioning I reckon, mack trucks, water tanks, houses being transported, this writing is not doing it justice at all, the speed with which things appear is insane. I have learned that the best place for a motorbike is in the middle between oncoming vehicles. But then something might come up in that path that makes it nessecary to cut over to the side for a minute. Honking the horn does actually work wonders. Today a person nearly backed out on me and I beeped and it was interesting because when I beeped a whole slew of random people on the street yelled instantaneously at the driver to stop. Haitians are reckless. They will jump on the back of a moving semi truck and cling to it like lizards, bouncing along the insanely bumpy roads.

We went to an orphanage. We met some kids. They were awesome and totally affectionate

I have to go help unload the truck now. Be right back.