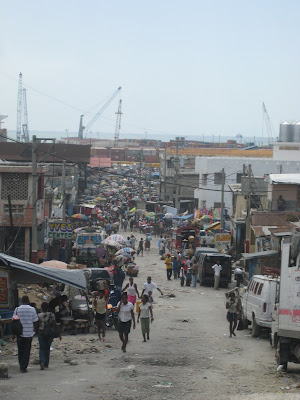 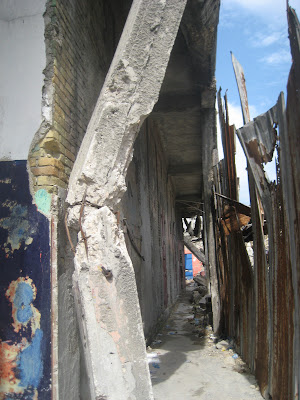 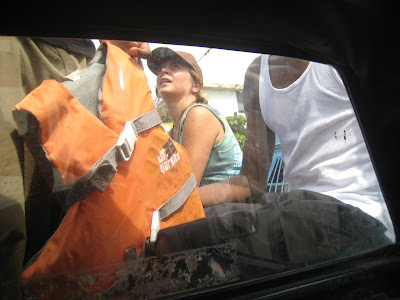 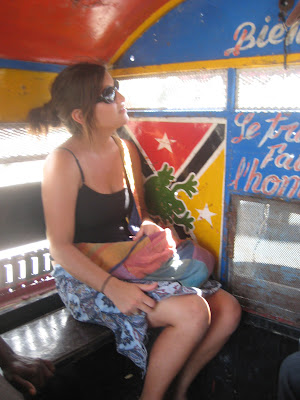 Today was a day off. Three of us set out on an adventure traversing Port Au Prince via tap tap with only broken french, spanish and unbroken english to aid us.

Haitian people are incredibly helpful, especially the men. They always have something friendly to say to women.

We ended up in a pick up truck ostensibly going to the plaza hotel but then I noticed we were headed out of the city, we were passing cite solel. I got us out of that one using my new york attitude. We saw some incredible sights today and I took some really fantastic photos. Too bad I'll never show them to anyone except the person who pickpocketed me.

I've had my cherry popped today! My pickpocket cherry that is. I borrowed a couple of photos of the day from Lanette from Fertile Earth, though. But I'll never see that one of the tiny pink shack with the entire family perfectly framed in the doorway or the awesome door with the prestige label painted on it or the national palace or the intensely crowded street scene unfolding down a narrow street on a steep hill or the enormous pile of knarled wood with the guy cutting it with a machete or the ginormous tangle of metal or the dudes in the barber shop or the ancient looking woman with the white hair sitting on the sidewalk with her hand outstretched or the colorful tap taps or the shop with a doorway showing the outside and a pile of rubble. and on and on (as kurt vonnegut would say)

But it's all good. I was going to give that camera away anyway.

I got a tip from a NGO dude at the Blanc hotel who was sitting in the restaurant with an apple laptop, an apple touch and a portable scanner. He told me there is a new office at the customs place downtown. It's called "expediated customs for NGO's" First thing in the morning I am so all over that place. Good thing I get up at 6am everyday.

I am considering buying a motorcycle to get around PaP with. My friend Richmond is advising against it because of safety issues. But getting around in a tap tap or a truck or car is just stupid. It takes 4 times as long, easy. I would sell it upon my exit from this country, if I ever do leave. I can't believe that non profit workers stay at a hotel that costs $116 bucks a night. That is insane.. Also the juxtaposition of the tent city in front of the National Palace and the Plaza Hotel is pretty jolting. We were walking along and there was a stage set up with a full sound system playing piped in music of a woman singing Jeff Buckley's "Hallelujah" and I was walking, listening to that and seeing the people's faces who were living there. It was another incredibly moving moment.

The day ended with all three of us riding on the back of a motorcycle all the way back to the compound.

Time for bed. I have a busy day tomorrow

thanks for reading and special shout out to my Aunt, Sister Mary!
Posted by Lmnopie at 6:43 PM