Friday was a complete bust, we were on lock down all day at the Grassroots Base. They wouldnt let anyone leave because of civil unrest throughout the entire city. It's called a manifestation here when people randomly riot and protest through the day. During the hottest part of the day it calms down because everyone is probably passed out under a tree drinking prestige.

Apparently its a known occurrence during these days for people to grab someone and stick them in a stack of car tires and set it on fire. It's easy to forget sometimes that this is a dangerous place. default mode for humans is to trust. Maybe that ought to be posed as a question.

People are protesting Preval violating term limits by running for office again. There is also alot of animosity towards NGO's.

Tonight there was a tragedy. Or should I say there is one unfolding as I write this. There was a young boy misdiagnosed. He had typhoid and his bowels burst. He needed blood to get surgery. Only place in Port Au Prince that has it is the Red Cross. They are closed on Saturday. No amount of begging or hammering on their door would make them open. This boy will die tonight because the Red Cross is closed on Saturday. Everyone needs a day off, especially relief workers, but how hard is it to stagger the days off so it remains open all the time? I am sure without a doubt that they of all the NGO's could easily afford to.

I am sitting in my tent, which is quite large. It's like a tiny shack. I can actually stand up in it. I have a battery operated fan, only it's not on right now because it's raining like hell outside and its so refreshing. Only its not refreshing for the kids without a tent. It's potentially life threatening to be wet and cold and to get no sleep.

I have been making plans for the dome build. For when the domes are out of jail. They are in Jail right now just up the road. I hope the warehouse people put my cases in out of the rain at least. Its all a bit out of my reach which I cant think about right now or else I might melt. All that would be left of me is my vest, shorts and boots.

I have found two local crew members from my neighborhood. They are sisters, Naftalie and Nellie. 14 and 15 years old. Women in Haiti dont usually build things. These girls are eager to learn how. They both would do it for free, Nellie said love is a good payment. She says that God speaks to some people directly and others need a translator. I will be paying them for their work as they learn. It is my intention to put women in places of empowerment and to model leadership over men for them. I was accused of being sexist today because I want a woman project manager. I wish I had a Haitian woman project manager. Maybe in 5 years after Nellie turns 20. I'm ok with being called sexist. In a world dominated by men, it helps to tip the scales the other way occasionally. Actually, that is what it will take to even it out. So,, yes. I am sexist. Women are smarter than men.

I would that I had at least a woman project manager to assist me in coordinating the builds. But I have Steve. Steve is pretty awesome though.

I wish Kara was still here. She would have been a really great role model for some of these young women on how to seriously kick ass. I'll be modeling being in charge and I am going to be very hands on, I will have to be because I am the only one who knows how to build a dome among the crew. That will change after the first couple go up.

Its a difficult task to try to empower women in a culture that is very entrenched in gender roles. It's a paradigm kept in place by both the men and the women. It is a very sensitive area. I wish I could have an entire crew of women to build the domes because I think it would shake things up in a much needed way. You may ask who am I to decide how another person's culture needs shaking. I would say that if women knew how to build homes there would be twice as many.

Tomorrow I will be going to a community meeting held in the neighborhood by women. They meet once a month to discuss important topics concerning the community. They solve problems. I will be approaching them with a proposal for an opportunity to learn how to build shelters/domes by helping to build some for orphans. I will approach it as if I have all my sights already built to avoid creating a distraction and mixed agendas. I will also be withholding the information that it is a paid gig. I will present it as an opportunity to help me help the orphanages at the same time as teach the skills I know to them. I will have a sheet of paper for interested women to sign up on. I will carefully intuit each interested person and then I will go home and decide on one or two and call them up for the first day. We will have a pre meeting where I will explain to them that they need work gloves and clothes and to be prepared to work hard "like a man"

On the first build day I will observe who is the best workers, who are the quick studies. I am talking about women who probably never held a crescent wrench in their life, let alone an electric drill. I'll see how it goes. I am well aware it will take much longer to build with inexperienced workers. That is ok with me because it's so valuable to show them that they can build shit too.

I will have a mixture of workers on the crews. I am going to have two white guys. Steve and Arandel. Arandel is from Canadia. He speaks Canadian French. He cant wait to build some stuff he has been the IT guy at Grub for the last week and it's not that great because the internet is spotty here.

So, there will be two white guys. Me.. Julian and the two girls. So far. I might have a couple more girls. Maybe the first day should be a trail run to see which ones can step up to the task.

There are alot of logistics to arrange. A truck of sand has to be delivered, half to the first site and half to the second site. We need to buy rubble. Believe it or not, you cant really get it for free. Granted it's cheap at twenty bucks a truck load, but think about it. If all you had left of your house was rubble, you'd want to sell it too.

Something as simple as making sure there is water to mix the cement is not simple here. I have to call the first two sites and check about that on monday. If they dont have water, I'll buy a couple plastic garbage cans and set them out to catch rain water. Hello. It rains buckets every day. Mercy buckets. Everyone ought to have a water catchmit system. Not sure why they dont. Even Grub doesnt have one.

I'm glad Steve is helping. He is a sweet guy. His eyes are disturbingly blue. He said he refuses to wear a dress. His response to me telling him I really wanted a female project manager, no offense to him for his gender. I am also glad for Julian. He continues to be my right hand man. I cant wait to see him get dirty. The guy is impeccable at all times.

I am going to go see what songs they are singing on the back porch. I wanted to go out to a party tonight but it started to rain and the security guys told us to stay in. 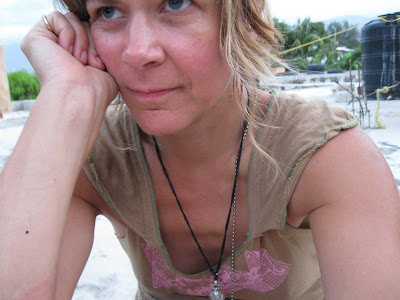