It was a long week, very productive and busy. it had some highlights and some disappointments. 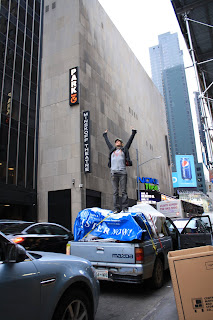 I borrowed a truck from my friend Callie and went uptown with David to the MTV studios to pick up the vinyl. My friend Janna met us there. 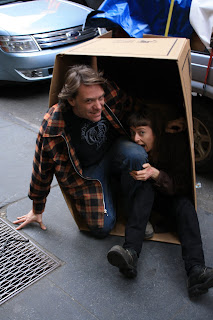 David and her got along really well. ...


They decided to take up residence in a large cardboard box on 44th Street but it wasn't big enough for the two of them.... 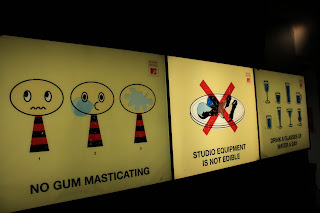 The guys in the MTV studios were so generous with me, especially George, he made sure I got a bunch of banners that would have ended up in the garbage otherwise. I tried to take a picture of the guys but they all ran away like little shy girls when I pulled out my camera. So I took a picture of the graphics on the walls in the hallway instead


Later that night, my friend Elizabeth drove me to pick up a couple of heat welding machines for vinyl from my old work mate Mitch who was working a la 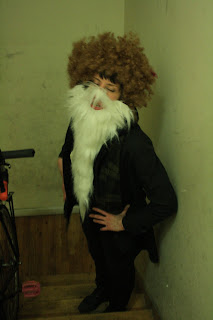 te night gig at the Natural History Museum. We decided to go incognito: 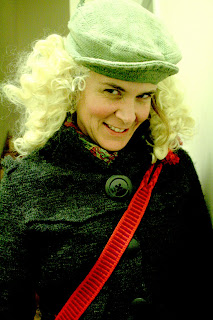 The next day I carried the two heat welders over to Bushwick Project for the Arts on my xtracycle, but I forgot to take a photo of that or of the welders themselves, but they really do exist, I swear! I now have a stash of supplies over there to begin the cover construction. That night I picked up the cut conduit pipes with Callie's truck and brought it over to Zach's metal shop in Greenpoint and we started pressing the ends of the stuff with this hydraulic press they have over there. Here is a photo of the press: 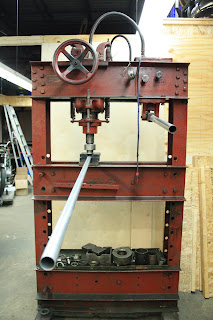 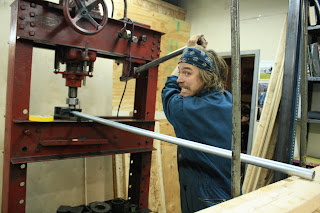 We both came to the realization that it is kind of insane to try to make all the domes by hand like this, I mean it took us two hours just to do half of them and as it was it was really difficult to get them consistent. Then I had this idea that I should approach a technical high school with the project and ask them if they would want to have their students do it for credit.
That would be an amazing project for a group of kids, they could learn about sustainability, recycling, metal working, humanitarianism and good work ethics. I am going to follow this train.


All during the week I have been having trouble sorting out the bureaucratic aspect of the project. Paypal has given me all kinds of hoops to jump through, each one creating new ones nestled inside of them kind of like those Russian dolls you see sometimes, one within another within another, seemingly endless and sort of sinister in the right light.

Today I went to work at the Hudson Theater and when I arrived there I discovered that there is a Women's Summit on Global Activism there all weekend. That was kind of amazing to me and totally inspiring and frustrating at the same time. I think there was alot of people there who would love this project and who have the money to support it, but how to connect to them???

I was working in the lobby, focusing lights when I looked down and saw a giant roll of vinyl on the floor. It looked like gold to me. I was like HOLY SHIT! That could make ALOT OF DOMES!!
Actually, now that I am remembering this I remember also before I even arrived at the theater today walking through Times Square and gazing up at all the billboards and my head spinning with the imagining of people being housed within a crazy collage of them. Of course, the collage would be on the inside of the domes because I would put the white part on the outside to serve as more of a heat reflector.

So I approached the scenic dude and told him about my project and he was very receptive to it and said he'd give me as much vinyl as he could if I came back on Sunday for the strike. (strike in theater lingo is the de-install of a show) The name of his company is Scenicorps and they are based out of Brooklyn Navy Yard. Y'all should support them, they are awesome.

At the event today I learned that the founder of one of the organizations I want to send a dome to in Haiti, Magalie Marcelin, died in the earthquake on January 12th. It's a shelter for battered women called Kay Fanm.
http://www.truthout.org/magalie-marcelins-death-haiti-a-loss-whole-nation56993
I was watching the video in the lobby and crying, knowing I would never get to meet this wonderful sister activist. What a loss.

I was totally engrossed in the performance of the play called "Seven" which featured some very fine acting from Meryl Streep, Marcia Gay Harden, Shohreh Aghdasloo, Lauren Velez, Archie Panjabi, Stephanie Okereke and Julyana Soelistyo. I was especially moved by the piece read by Archie Panjabi about a real life woman named Mukhtar Mai, a Pakistani who was illiterate when she was raped by 4 men and then she took them to court and won. She took her settlement money and started a school to teach girls how to read. It was an incredible story as were all the other ones, but hers in particular really hit me in the heart.

This weekend I am going to be taking it easy, doing some research into finding a technical high school who wants to take on this project. The idea of having high school kids build domes for orphanages in Haiti is one I am very excited about.

I am also hard at work at home trying to find a non profit umbrella organization to help us out.
Doing things DIY is great and all, but sometimes we artists need legitimacy that other people have already. What I really love about this project is how its all about networking within a community of creative people and collaborating and pooling resources. Someone over here has a drill press, someone over there has a heat welder, someone over there has a truck,.... we all lend a hand and the result is larger than any one person

As with most things I have done in my life, this project is evolving as I go. If I were to have it all figured out before I began, I would never have began because the figuring happens as you do the thing. So I took the first step and then some obstacles appeared, so I dealt with those obstacles and took the second step and so on. One thing is clear to me and that is that my commitment to achieve the goal is 100%. I will do everything it takes. I will adapt to any obstacle thrown my way and become stronger for the adaptation.
Posted by Lmnopie at 9:45 PM