Yesterday was a very productive day. I spent the morning sending out emails to potential fiscal sponsors. Looking for a non profit organization to umbrella this project is priority. Traffic to the website is being tracked now and in one day I got 182 hits. It's unfortunate that my initial umbrella organization backed out because now people are visiting the site and cant donate easily because i removed the paypal buttons because paypal has frozen my account until I can update and add a bank account to it. I cant do that until I get fiscal sponsorship. So in the meantime, if people want to donate to this project they have to send a personal check to me or they could send a check made out to the place where I will buy the conduit pipe. It's called Industrial Electric Wholesale. 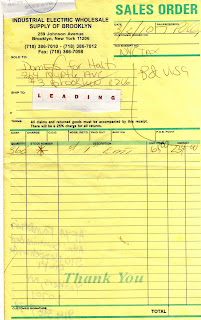 We will be needing money to purchase our second batch of conduit pipe next week, so please do send money....
you can mail it to
Domes For Haiti c/o 3rd Ward
195 Morgan Avenue
Brooklyn, NY 11237 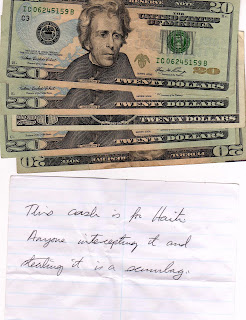 Apparently, though, you can send cash in the mail! I just got a hundred bucks from my ex boyfriend Chris Grill who lives in upstate NY but is from Wales. He sent a sweet note along with it. Thanks Chris!!!!!!!!!! 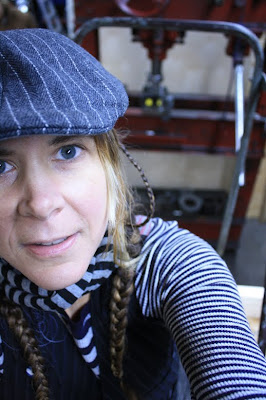 Email me and I'll tell you who to make the check out to: info@domesforhaiti.org

I know it discourages people from donating, but that's the best I can do right now. Those of you who have already donated, thank you and paypal is holding the money. I am going to contact you each individually when I get my new bank account set up and I will have to refund your money and then I will give you the option of re-donating it via google chrome to my new account. I know it sounds complicated but really it's just a speed bump aka sleeping policeman.

I've received a few responses from my emails seeking sponsorship so far, but only one seems promising. A large well known organization has asked me to come into their office for a meeting tomorrow to discuss fiscal sponsorship. I am not going to announce who they are until I know it's a definite.

So, yesterday. I drove Ben Wolf's truck over to the Brooklyn Navy yard.
He and Callie are traveling.. having use of this truck is making things so much easier!! I couldn't have carried all that stuff on my xtracycle.
THANK YOU! 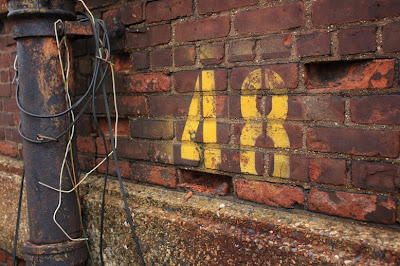 Brooklyn Nayy yard is an urban decay junkie's wet dream
There are so many decrepit buildings over there and intriguing piles of debris, one could spend hours just wandering around and looking into dumpsters and behind fences. I was there to pick up vinyl, though. So I drove over to building 292 and met Disco from Scenic Corps. He directed me to the huge pile of vinyl they were giving to me. 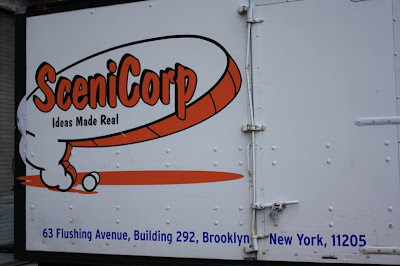 Their shop is pretty huge, with bays on both sides of the building full of tools and men working. Because we were men and we built things. Sorry, that's a stupid quote from a comedian named Rob Shapiro. It was worthy of note that I saw no women building things in that shop. 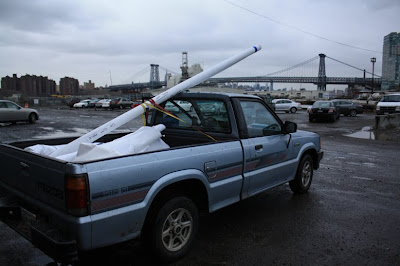 So I loaded up Rhonda with the vinyl and strapped it on.
and drove over to Bushwick Project for the Arts.... 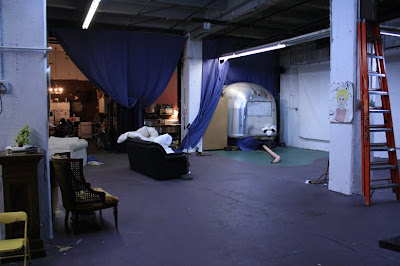 The guys there helped me unload all the vinyl and we stashed it in the back with my cache of supplies. This is what the space looks like in there. Lot's of room to build a dome. Now with the donation from Scenic Corp to add to the one from MTV, I believe we may have enough vinyl to build all ten domes. Not sure, I'd have to lay it all out and measure it to see, and the time it would take to do that is not very wisely spent. I'd rather just take note when I am running out of the stuff and then go get more when it's needed. I am not at all worried about having enough vinyl. The shit is plentiful and there is always my dykes and a good climb up the side of a billboard. 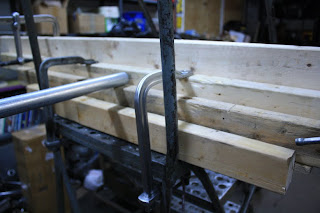 Later Zach came over to my house and we ate cous cous with kale aka hippy food. Then we went over to the metal shop in Greenpoint and this time we set up a much better jig system to have consistency in the length of the flattened ends of the struts. The system was not great, it was totally ghetto because it was all built on top of a very rickety step unit and required me to stand on it to ground it out so it didn't shift every time the press came down on a pipe. That meant that Zach did all the pumping while I stood on the unit. I felt like I was a puppeteer in a puppet theater. 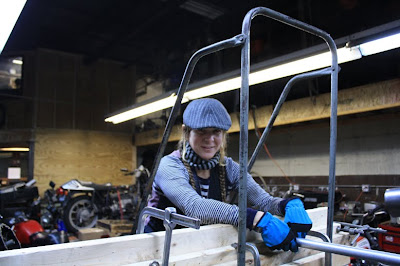 Zach was very active. He reminds me of the muppets. 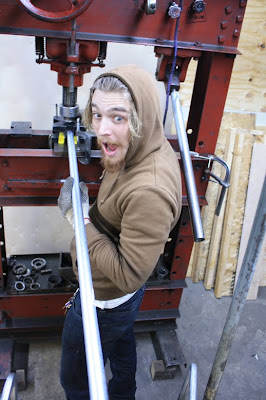 We were both on a time crunch so we powered it out, it took approximately an hour and a half.
So far, it's been approx 7 hours of two people's labor from the buying of the conduit pipe to the present state which is without holes and not bent at the proper angle yet. Zach just told me that our other friend Orien said to him "we have a pnuemonic press at this shop, why didn't you just bring it over here?" They are building pontoon boats with motorcycles on top of them for the next phase of the swimming cities project called Oceans of Blood.
So, apparently, next week when we buy the next batch of conduit pipe with your contribution (thanks in advance, you are so generous) we will be slamming out the ends of the pipes in half the time. fantastico 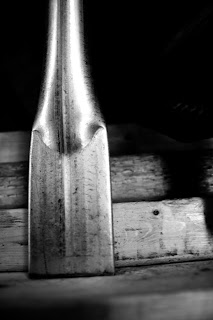 We managed to achieve a really nice, clean pressed state, with consistency and a curved edge. Next they need to be smoothed on the edges and then we need to make two jigs for the different sized struts to be drilled with 3/8 " holes on both ends. 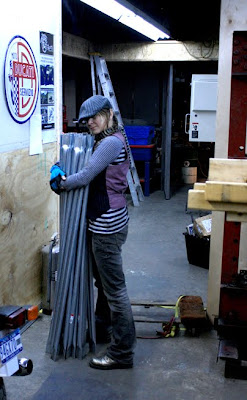 Later, I decided to go to Paige's house of collections for a birthday party for Anne. I love going over there, it's like a trip to a house of curiosity with treats and interesting people to talk with. I have been noticing that my total obsession with this project is altering my mind and my perceptions about art in general and it's usefulness within a world which is heading for the tubes if things don't drastically change. I was thinking about Domes for Haiti or Domes for Sri Lanka or Domes for Brooklyn. If an earthquake hit Brooklyn alot of people would need insta shelter. I know I am going to keep one on my roof right next to my canoe, just in case. Flood, earthquake, hurricane, airplane, who knows.

Anyway, I am finding that time spent socializing is just as productive as time spent bending pipe ends. At Paige's I met a woman who just got back from Haiti and made a film about it. It's called Poto Mitan. In fact, when I was at the Women's Summit for global activism the other day, one of the trailers I watched in the lobby of the event was hers. Talk about synchronicity. I love when that happens. She speaks creole and just got back from Haiti. She has been there 6 times. Has some Haitian friends here in Brooklyn who are looking for a project to work on. I think it would be amazing if we all collaborated on making this thing happen. I really need a team of people to co-ordinate all of the volunteers and I think it's important for the team to have a couple Haitian people on it to legitimize it more and work with solidarity instead of an imperialistic viewpoint.

I am also looking at the design of the covers and how to incorporate certain things into the design. I am really excited to make these dome covers. I used to support myself by being a hat maker/designer years ago and a dome is very much like a hat. A hat with windows and an insert for a stove pipe holder. A stove pipe hat? That would be cool. With smoke.
I need mosquito netting. Lots of it. So how am I going to get this for free? Any ideas??

I keep getting these emails back from potential sponsors, directors of arts organizations saying something like "I love your project but I dont really see how this relates to art" I thought you might like to read a response to that I just sent out:
I replied:
Yes, I understand your concern. However I do feel it fits well within the realm of an arts organization because all of the people volunteering their time, skills and tools on this project are artists. It's an example of how an artistic community can pool their resources and create models for disaster relief. Also, the finished dome covers will be art in that they are composed of recycled banners and billboards featuring images from pop culture and advertising native to our culture. The finished covers will be like a 3D inverted canvas with the images inside. The audience for this collage are the inhabitants of the domes. A dada-esque collage of pop culture being sent to house people who have no shelter. Who says art has to be solely for viewing purposes? This art is functional. It is art as activism, art as community and art as disaster relief.


Later. Thanks for reading. Feel free to comment.
Posted by Lmnopie at 7:44 AM