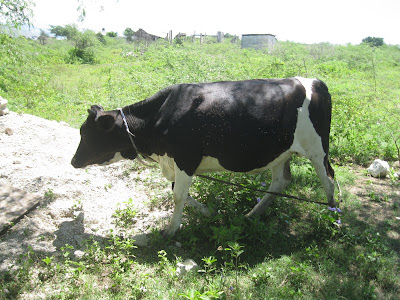 I am still in Port Au Prince.

Making plans in Haiti is a silly person's endeavor. It always never turns out as you planned, so why do I bother with plans? I am a silly human, that is why. Humans are funny creatures.

I was supposed to leave here on Friday at noon to head to Jacmel to build dome number TEN. But then mud happened. It has been the hardest build of the entire trip.
As I mentioned in my last blog post, we are building a new orphanage. One for street kids.

Only, its a completely raw space, there is nothing there. I found out, day two, after we got hit with a doozy of a thunder and lightening storm on day one, that the water table on the land is extremely high. This makes it extremely MUDDY!

We returned the next day to find a veritable lake under the dome frames we had set up, two of them. It was completely perplexing situation, not to mention that I hadn't brought any rubber boots for the crew to work in, so I had to leave them to return to the base to collect all the rubber boots on the premises. Of course I got stuck in a two hour traffic jam while the kids were over there slogging around barefoot in the mud trying to dig canals. Worst day ever. My back went out too, so I was somewhat rigidly postured all day, in extreme pain. Wonderful day!

So last night, I was extremely disheartened and in total back pain when I returned to the base. I appealed to Emma, the Orphanage Coordinator at GRU to help me get more help to finish this project. This morning I was given a project manager, Aldy and two more haitian volunteers, only I would be paying them so they are technically not volunteers when they are on my crew. I was totally happy because Aldy is bon zammi mwe..

I am really very fortunate to have been able to work with pretty much only Haitian locals as my team. There have been a few volunteers who have helped who were north americans of some sort or other, (shout out to Hannah) but for the most part I have been solely working with Haitians.

It's why I came here, so this is important to me. I am learning Creole, feeling part of the community more and more here.

Yesterday was intense. When I returned to the site with the rubber boots, I was hoping that the truck of rubble we ordered had arrived. I had high hopes for a huge pile of rubble being spread out in a circle. My hopes were dashed into the mud. (oh the drama!) There was no pearly white shining rubble pile. Marde. We spend most of the time in Haitii waiting. Sometimes the thing that you are waiting for comes, eventually. Other times it doesnt come at all. Most times the pwoblem is machine related. Sometimes something entirely unexpected shows up. You make do with what you got.

We tried to find someone else to call to bring rubble, but to no avail. So the madame that lives there suggested we walk out to the road and flag down a passing mack truck full of rubble. I am not kidding you. We went out to the road, Nephtalie me and this lady. Pretty soon, sure enough, here comes a huge truck full of rubble. I start waving my arms like a mad blanc. The truck stops. We run up to it and start to negotiate a price.
They want 6,000 gourde! It's like 150 bucks american. I'm like, uh no, merci

And then we trudge back to the site through the muddy mudfilled mud lane dejectedly. I am feeling literally swamped. I had plans! In Jacmel! I felt like I would never get this build done. I couldn't put the domes up on top of mud, but I had a deadline to get out of GRU by Saturday at noon. Not self imposed. More about that later.

So, I ask the lady again, after a long coversation about why I dont have any kids. if she knows anyonne who can deliver rubble, today. She says oui. She calls a dude who says he can bring a load over and drop it on the site for 2000 gourdes, which is almost 50 US. So I say oui and pretty soon here comes a guy in a big mack dump truck filled up with rubble. I was excited!

The dude promptly got stuck in the neighbor's front yard. His giant tire was sunk in the soft soil. He seems quite irate and everyone is yelling ideas and suggestions at the same time. The guy suddenly starts to dump his entire load behind himself btween the rear of his truck and the road, thus blocking himself in. Because there is no way forward besides a very muddy area where he would never be able to make it. BUT there is a back alley way kind of path on the other side of the site that I had already noticed as a possible truck route for dumping the gravel.

The back of his truck starts lifting, rubbles start falling, I shout, "STOP!" "FINI!'
Until the guy stops. Immediately when he stops, everyone watching, all my crew, all the neighbors, even the kids, start yelling. No one is listening to anyone else.
Its a cacophony of sound, a calvicade of voices. I again shout "SILENCIO" which I think is actually Spanish. Everyone is quiet. I say listen to me, and tell Nellie to translate to the driver for me. I tell him not to dump the load there ,but to back the truck up instead because he would get stuck in the mud on the other side. Of course he didn't listen;
I told him if you dump the rubble there, I am not paying for it. He says I dont care if you pay for it or not, i need to get out of here. So he dumps it behind himself and then gets his truck unstuck and drives right up the mud driveway and just sinks his giant front wheel into a really deep sink hole. Blam. Stuck. Um, yeah, hate to say I told you so, and I dont know how to say that in Creole yet.

Anyway there is an even bigger commotion but then I get tired of this dude and all his drama, I pay him 1500 gourde, to be fair because he dropped the load where I did not want it, creating an entire extra day labor to move the stuff with a wheel barrow. If he had just listened to me in the first place, he could have driven it up the back way where it was firm and dumped in practically on the exact spot..

So we made do.

Now, a day later, we managed to get one dome up and skinned and the other plot mostly prepped, but it still needs more work. Also, it is raining alot right now, so
we'll see how good the canals work. I am sure it will be flooded around the dome, but I am pretty sure the dome itself will be dry inside. I am hoping.

One can only hope.

I had no idea this was going to prove to be the hardest build of all. I mean, I thought it would be a simple build, I was wrong. I am hoping to finish it up by tomorrow night, but this is Haiti. I got an extension on my deadline, more on that later.

I am getting very tired. I have alot of work to do tomorrow.
Shout out to Aldy and my entire crew. You guys are amazing. 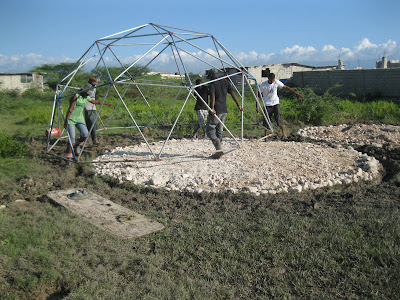 I have many many awesome photos of this build! I haven't time right now to upload them, however. If you check back on Sunday night, I'll have them up.

Thanks for reading me! 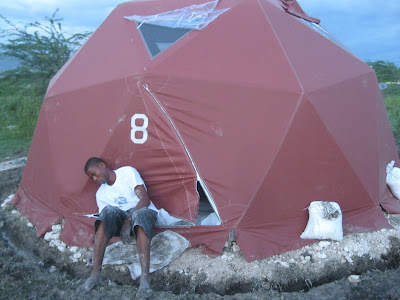 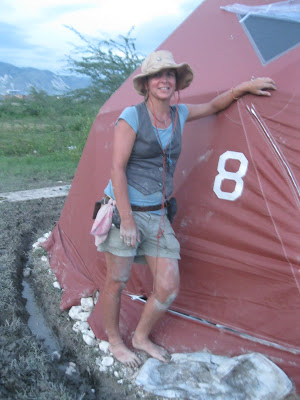 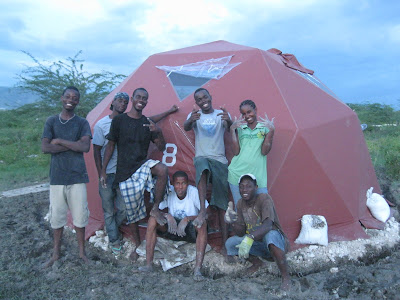