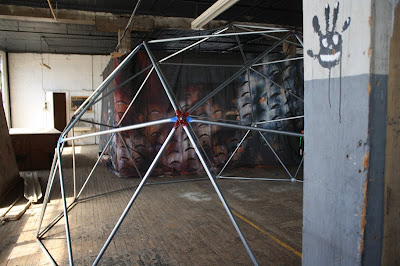 We had a nice turnout for the screening of Poto Mitan this evening. Many new friends came out to support the project. We made about $370. Not alot of money, but every bit helps. Also, it was a rainy Sunday night in Brooklyn. Bike Powered smoothies were had by all! Spontaneous bouts of dancing were witnessed and some wonderful drumming by Makandal
Thank you to all who came out in the rain to support this project.

I started planning a huge benefit party to be held at the Gowanus Ballroom in a couple of weeks. Events like the one tonight are great for networking and connecting. But we need to do an all out crazy Brooklyn underground party to raise the roof. We will bring it.
We will make it interesting for y'all, we'll have a woman suspension artist there among other intriguing acts. More on that later.

We are gathering forces for the benefit on Thursday at Sugarland, we have such an amazing line up of artists showing their works. We will be adding some local Haitian artists to the line up tomorrow! There are also three wonderful musicians appearing at the benefit including Rachel Sage 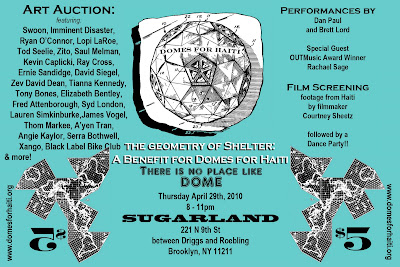 I am still waiting for word from my metal fabricator as to when the struts will be ready to be packed. He had originally said today, but he ran into some troubles, I guess he broke an arbor press and then made another press out of two car jacks. I really wish I could get him into the motorcycle shop where Zack and I pressed the first batch on that hydraulic press. That worked fantastically.

So, all of you who are planning on helping, thanks and i will keep you posted on the exact time and date of the packing. We are looking at tuesday now, but we'll see tomorrow how John is doing with the presses.

We will be getting quotes tomorrow on the fabrication. We have some donated fabric coming in as well as the final prototype's dry run early this week. We might be able to fabricate the dome covers right in good old Brooklyn. Represent.